Talking about advertisements, the first thing that crosses our minds is the excitement. It is the creativity of the design and the wordplay that leaves behind trails of enthusiasm, even long after it’s launch. But just the visual elements of the commercial are not everything that make the campaign a grand success. There is this other side; The equally important factor called cost. Especially with so much of marketing activities nowadays, it is easy to get lost in all the WOW. If your campaign should tower a head and shoulders taller than the rest, you need to invest, not spend. Here at Zoho, we have an application to keep track of the campaigns that come up for every product. And as we have a very wide range of services, it becomes necessary to moderate decisions. 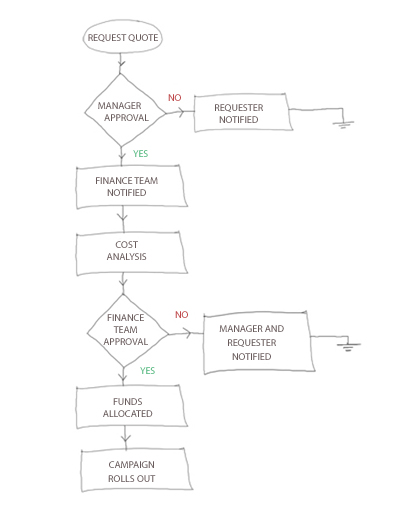 Of all the services we offer, whenever a seemingly viral idea emerges, the team weaves it to completion. To launch it, they would raise a request on this Advertisement tracker application. The request has a detailed description of the product, type of campaign, the target-audience and estimated cost. The approval module triggers a notification email to the approving authority, the team’s manager in this case.
Before the managers approve or reject, the team would demonstrate the whole idea to them in person. This is not because they are superior and are the deciding factor, but because they might come up with a master stroke that might make a difference. Be it either trade shows, banner ads, bill boards or other campaigns, once the request is approved, the team that raised the request is notified.
In addition, the ticket is moved to the finance team; The bankers. It is the finance team that maintains this application, and has the authority to add new advertising locations, types of campaigns and include users. After the cost-benefit analysis, the fund is approved. The manager and the requesting team are then notified of the approval. They can now carry their campaign forward. Another note-worthy aspect of this application is the detailed reporting and analysis. Being powered by Zoho Analytics, reporting becomes all the more picturesque than ever before.
This Zoho Creator application is not one of the kind that has so complex code stuffed into it. Nor has it got anything to do with the success of an advertisement campaign. Too bad, it doesn’t. But it does something inevitable; Helping us invest instead of spend. Try this application.

Your email address will not be published.Required fields are marked*